Since our treasurer Nancy couldn’t make the meeting, Lotus reported on what the bank said we had as of the March statement:  $554.16

Retzlaff Winery is hosting Spinning at the Winery on June 4 this year, from 10-4. Retzlaff Winery is at 1356 Livermore Ave on the outskirts of Livermore, CA. There will be the usual $5 entrance fee that also covers parking your car. Background:  The brother of Will Taylor of the Treadles 2 Threads spinning group owns the winery and has kindly hosted this event for quite a few years now. Spinners congregate and enjoy the winery ambiance. Lunch is a potluck. Please do not bring drinks — buy them at the winery. A number of vendors typically show up to tempt us with fine fleece and other spinning goods. Morro Bay mill normally shows up at this event so if you have fleece you want prepared or buy one at the event, you can hand it over. For more details about the event, see treadles2threads.blogspot.com

The Mt. Lassen Fiber Guild is having their 5th annual Fiber Fusion event October 8-9 2016 at Historic Patrick Ranch and Museum — 10381 Midway, Durham CA. That is about 2 miles south of Chico. There is a $5 admission and free parking. This event features a fiber marketplace, spinning and weaving demos, yarn and textile competitions, a sheep dog trial, some free mini workshops, and children’s activities. It runs 10 am – 5 pm on Saturday Oct 8 and 10 am – 4 pm on Sunday Oct 9. For more information, visit www.Fiber-Fusion.org.

If you are interested in events, look into the Wool and Apple festival. It’s held in late September in Boonville. The event coordinators just sent us this info in an email:

The Annual California Wool and Fiber Festival will be held in conjunction with
Mendocino County Fair and Apple Show. CWFF hosts The California National Wool Show
with entries from all over the country. From the source of the fiber, come follow the thread
to the fine fiber end products. The show will also include Angora rabbit and sheep shearing demonstrations, a fiber arts show, vendors and the famous spinning competition and much more.

For information call Nancy Finn at 707-459-8558
or visit our website at
www.fiberfestival.com.

Ange showed us yardage she made for CNCH. She brought together her stash of small balls of handspun from assorted classes, etc., arranged to them to distribute the main colors, and wove them at a sett of 8 epi. Ange spent the meeting spinning a gray/brown Wensleydale x Romney fleece that had been pin drafted at Morro Bay. 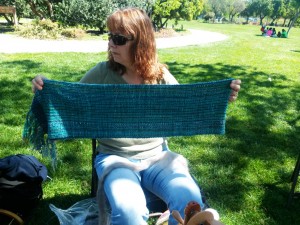 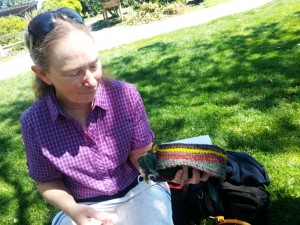 Aviva had a red handspun sweater that she knitted up in a red-on-red Fair Isle pattern. After carefully cutting her steeks and taking them down, she put it in the washer for a short time to finish. Unfortunately it shrank about 3 inches and no longer fits. One lesson she learned: her instructor on making steeks said that it doesn’t matter what thread you use to sew your steek. Aviva used brown on her red sweater and it did show. When the cardigan is unbuttoned, the steek can show. Aviva hid her brown thread by putting down a sewing tape to hide the brown. 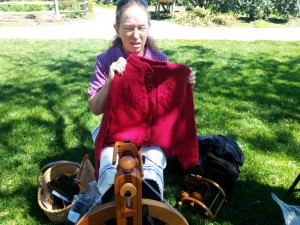 Aviva is starting to spin some blue fiber that she got from Abstract Fiber at Stitches. She’s planning to make a white sweater with blue and red stripes. Aviva ordered a pocket wheel. This is a tiny, 6 pound wheel that fits into a fairly small bag. It features direct drive and has pedals. It works with several kinds of common bobbins, including those for Ashford wheels. The Pocket Wheel ships with just a spindle. There is quite a waiting list. Aviva thinks she’ll get hers in about a year.

Lotus also has an order in for a Pocket Wheel. She got a lot of information about the wheel from the Pocket Wheel group on Ravelry. The wheels start at $600. The cost goes way up if you order one made from exotic woods.

Lotus showed us her Return to Sender project for CNCH. She fought colors that bled and struggled to work with colors that she felt were ugly. She did get a blue ribbon, though, for her mix of yarns that in total met the threshold of 50 yards to qualify for the contest. 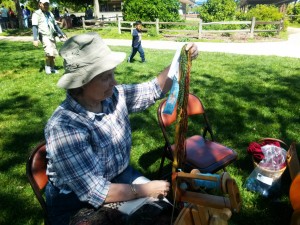 Lotus entered a multi color vest into the CNCH fashion show. She finished the vest on Monday — just ahead of the CNCH start on Thursday. She added interest by deliberately exposing the selvages on the back and weaving in some thrums. The vest has a false dart to make the shoulder sit right. It is woven from singles. 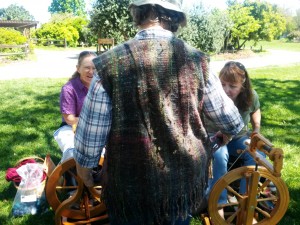 Lotus experimented with dying wool with avocado peels. She put the peels and wool into water then simmered for 1.5 to 2 hours. She said that it is OK if you have some seed too. Her white wool turned a brownish pink color she called “Old Rose”. 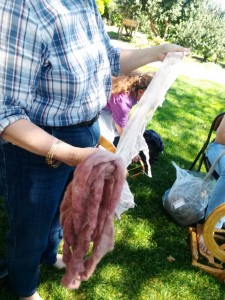 Lotus’s final show & tell item was a weaving project from a class she took:  Weaving with Supplemental Warp. The brown square pattern was made by laying a supplemental wrap on top of primary white warp that was wound onto the beam. She used a stick to keep the brown warp draped off the back of the loom from mingling with the base white warp. The project was woven from 5/2 cotton. 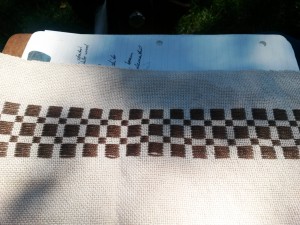 Lotus’s project from a Weaving with Supplemental Wrap class 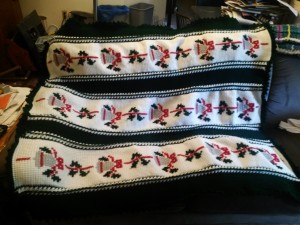 Lynn is going to be a grandmother again. She made a baby blanket with a simple center and a feather & fan stitch on the outside. Lynn has ordered a larger charkha — the Bosworth charkha. It is due to arrive this fall.

Lynn will be sending out email to kick off our attempt to organize for this fall’s sheep to shawl event. We’ve got openings on the team that competed last year because Lotus wants to rest the day after she gets back from vacation instead of competing. This is the first Saturday in October. If enough people are interested, we’ll field two teams.

Patti went to stitches and took classes on how to knit and how to crochet. She finished spinning and plying the fiber she received at our Christmas gift exchange. She has been crocheting squares. So far, she has white and gold squares. Patti decided that the crochet shawl she’d been planning to do was just too big and complex a project for a beginner so she’s making squares that she can later combine in some way. Patti feels she’s made a lot of progress, especially at being able to spot her mistakes and figure out what to fix or compensate. 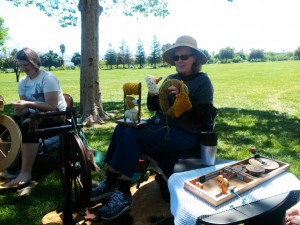 Jennifer came late and almost missed show and tell. She spun up 4 full bobbins and made a scarf on one weekend binge. Jennifer started knitting a year ago. She is planning to bring her finished objects but so far, is doing better at starting projects. Right now she has 2 shawls, 1 blanket, and 1 cape all in progress.

Jennifer has also been busy with Ajax. She and Ajax have been invited to an extended Renaissance event.

Jennifer toured a fiber mill. She learned a lot about the financial aspects of running a mill. The mill was outside of Davis but the notes taken at our April meeting didn’t include the name of the mill.

On the topic of fiber mills:  Lotus reported that a new mill is opening just south of Ukiah. Lotus didn’t know its name.

Cookie arrived even later than Jennifer. She modeled a handspun silk scarf she’d made. 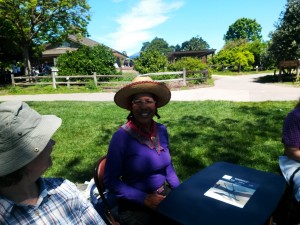 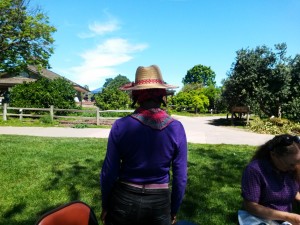 FYI:  Cookie tipped us off to an event to be held at Ardenwood the day after our April meeting.