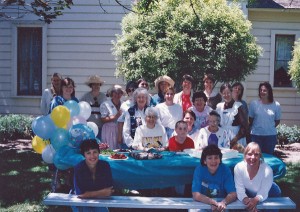 by Ginger, Sue and Frank (behind the lens)

Many thanks to Carol, Ginger and Lotus for taking over this newsletter in the up coming months.

The museum has informed Marcia that we will not be able to meet at Kelley Park on our usual dates of May 19, June 16 and July 21. The presidents are working on figuring out when and where our meetings for the summer will be held.

Ergonomic Class
The class is about $100 an hour. The instructor suggests that a class be about 2.5 to 3 hours. We can and will invite other guilds while we subsidize our own members. How much is to be determined later. Scheduling the class is being made somewhat difficult by not knowing when our meetings will be.

CNCH: If our next meeting was actually on May 19th, it would overlap with CNCH. We had agreed that anyone planning on attending the May meeting should RSVP to Ginger. However, this may not be necessary since the museum won’t let us meet that day.

Upcoming events: September 14-16 is the CA Wool and Fiber Festival and Mendocino County Fair. This fair has a fleece auction on Friday, the 14th. This fair is at the Boonville fairgrounds. Eureka is near and has hotels
Saturday, June 2 is the spinning at Retzlaff winery.

Lotus: is spinning Return to Sender. It’s a blue-faced Leicester and 15% tussah silk naturally dyed. She’s planning on plying it with beads. Next year, is Return to Return to Sender where the skeins are made into something and then sent back. She’s been using odds ‘n ends to make “Hex A Puffs” – they are two hexagons with the edges knitted together, stuffed and then Kitchner stitched together. They can be made into pillow coverings or cat toys. She started them with Judy’s magic cast on of 10 stitches. Increase every other row until it’s 20 stitches across, then decrease. Kit in the round. The pattern was inspired by a picture Lotus found online.

Ginger: (neglected to fill in her info, however, we do have pictorial record.) 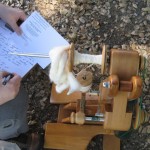 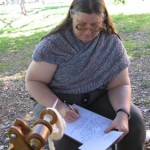 Jennifer: is spinning silk/merino. Her horse, Captain, has been returned to his previous owner. She’s getting a new horse, an unregistered quarter horse type with the name of Ajax, in a week or two from time of last meeting. 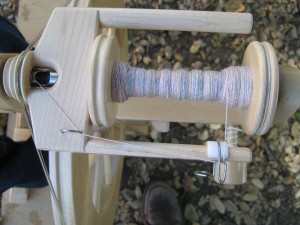 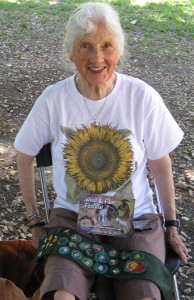 Nancy D: was/is traveling to see family. Her Questers Group is having a mini-convention in October. Nancy is going to give a program on the Girl Scouts. She showed off a badge sash she found as well as asking all of us about our Girl Scout experiences.

Frank: brought nothing for show ‘n tell. The current project is some hand carded Lincoln that he’s spinning on a drop spindle. 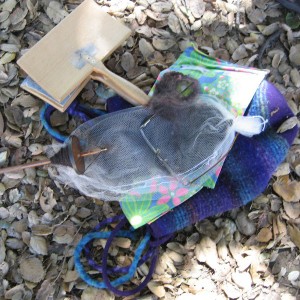 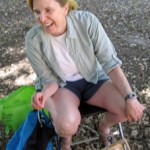 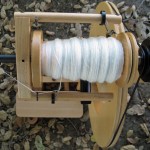 Aviva: is spinning wool she bought in New Zealand. They are Gotland sheep that were brought in during the 80’s and bred to make their wool softer. They are now accepted as a breed. It was this fiber that was used for the cloaks in the Lord of the Rings. She spun silk/camel from CNCH of two years ago. It’s 8oz. spun to 2,100 yards. She’s working on a shawl from the center on size 1 needles. She has 11 skeings and is likely to need 8 of them for the shawl. She’s found that she likes the metal lace needles much better than the bamboo needles she started the shawl on.

And that’s April in a Nutshell.