February Nutshell
by Ginger and Sue

Please note I (Sue) have been working on the website and newsletter since January of 2008. As of election time this year (November of 2012) someone needs to step up and take over the newsletter. I’m more than happy to train my replacement. Start thinking seriously about who would like to replace me.

Is anyone interested in having Carson Demers put on this class for our meeting (or some other time)?

Sue found this class through the Yarn Harlot’s blog. Carson charges $100 an hour plus expenses. Since he lives in San Francisco, the expenses will be minimal. He’s willing to work with us if we want something different than his standard class.

Aviva has the spreadsheet she made with the contact information of guild members. She will email it to the attendees at the January meeting. The presidents will print off copies and bring them to meetings.

In response to a card from Chris Wallace’s husband, Ginger has volunteered to print and mail newsletters to Chris.

No Context: The notes say:
“Email Carol, Lotus and Aviva with Claudia Ward’s email regarding the Monterey County Fair wool judge – she teaches classes and will be around a couple of days before.”

Question: Would we be willing to give pointers or demos or whatever to an author-friend researching a fiber-spinner character for a book? Reactions were generally favorable though there are no details at this time.

Please forgive the editor if the pictures and text are not matched correctly.

Judy: has a new, hand made wheel. The maker is a math major and wood worker. She brought a 20 year old fleece and is learning to spin, again. 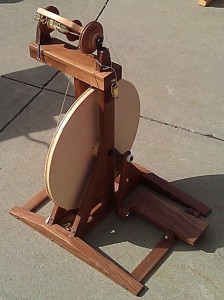 Carol: started a knitting project. She got a pattern book last year and is trying out one of the sweater patterns. It’s a big circle with added sleeves. She’s using a fairly chunky color changing yarn. 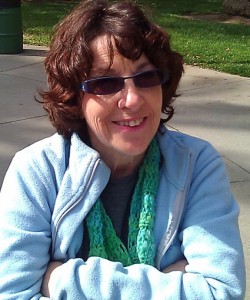 Lotus: is working on an easy project. It’s a tam for her the mother of her daughter-in-law and is being done in leftovers from the hats she knit for the kids. She has about an inch of it done.

Jennifer: has a new Ashford rigid heddle loom. She’s spinning old fiber. She hasn’t been around due to the demands of school, her horse and a weaving group.

Ginger: is continuing to work on her afghan stitch, Navajo-flavor throw. She’s almost halfway done. She made one set of baby trousers for one of her many pregnant colleagues. She couldn’t resist doing the first square of a a kit. She spent longer reading the pattern then crocheting. The pattern was very complex. 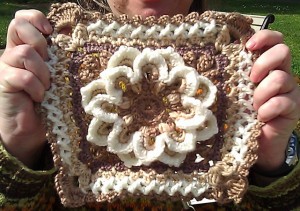 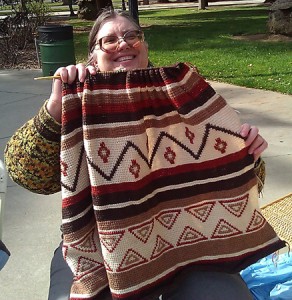 And that’s February in a Nutshell.