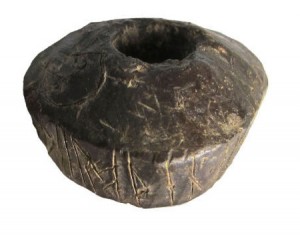 Do you think spinning wheels are old-fashioned? Think again. Before spinning wheels there were spindles. Spindles are simply sticks with a weight on them that make them spin like tops. In late summer of 2010 a lead spindle-whorl with a Norse runic inscription was found in England. It dates to the 11the century, the Early Medieval period. You can  read about it here and see other pictures of it. It is about the diameter of a silver dollar. 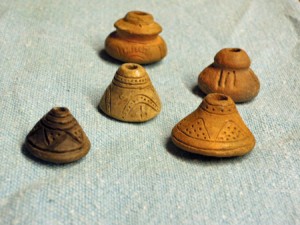 And then there are these Bolivian spindle whorls that are even smaller. They were found in the yard of a farmhouse in the Bolivian highlands and given to Laverne Waddington who researches and recreates the backstrap weaving techniques of early weavers. You may see more about her work here. These are even smaller than the 11th century whorl and were probably used to spin cotton.

A shaft, a stick of wood, would go through the center of these weights and be twisted like you would twist a top in order to put the spin in the fiber and give it the strength to be used in making cloth. How long do you think it would take to make all the clothes you have in your closet if the fibers were spun this way?