There was a large turn out this month on what felt like a warm Spring day!

The Treasurer gave her report and collected dues. Stitches is next week and as always everyone is looking forward to it! Ange told us about the Tribal and Textile Art Show in SF beginning Feb. 21. She also reminded us about CNCH in Burlingame in April. Many classes are still open!

During our meeting many interested park-goers came by and Kelly handed out some flyers for those wanting to learn more about our craft.

There was a large group this month for our holiday pot luck/gift exchange. There was plenty of food and fibery gifts!

Our meeting began after lunch which included the Treasurer’s report and the collection of annual dues. We spoke about upcoming CNCH in Burlingame in which there are still classes available. Laura informed us that Stitches West (which is Feb 19-23, 2020) will be moving from Santa Clara to Sacramento in 2022. Carol announced that Meridian Jacobs will be having their shearing day February 1, 2020. Patti and Carol talked about Bethlehem.

It was brought up that perhaps our existing website is not serving us as it should, and also is it worth the monthly fee. We discussed options such as a Ravelry group or even a blog, which would both be free. Sharolene agreed to research these options. We also talked about having business cards made so when we are out (whether at demos or on our own) that we’d have something to give to someone with the guild’s information.

Show and tell began with Laura knitting a shawl from Lambtown fiber spun on her great wheel. Carol was spinning jacob from Meridian Jacobs. Sharolene shared her lovely shawl made from woven squares from her pin loom. Patti was spinning alpaca and also shared a fleece blanket with a crochet fleece edge. Cookie showed us her various pin looms. Cheryl was knitting a hat and Joan shared a delicate blue lace scarf. Kelly showed a black and neon scarf she had just woven and Nancy was “re-knitting” a too wide scarf to a more suitable width.

We were met with cool autumn weather and falling leaves at this month’s meeting. Carol talked about next year’s Sheep To Shawl contest at Lambtown Dixon and the newly formed team. Ange spoke about the upcoming CNCH conference April 3-5, 2020 in Burlingame. She suggested to register soon for classes! She also told us about their fun “Return To Sender” contest. There is more info on their website. Kelly reminded everyone of the Holiday Potluck and optional gift exchange on December 21, 2019 from noon-3:00pm in the Plant/Science building. She also reminded the group about the need for fish themed knitted or crocheted hats for the Courageous Kids/American Cancer society for their April 2020 event.

We had a good size turn-out this month as we were met with cool weather. Meeting was called to order and the Treasurer gave her report. Lambtown festivities were discussed as well as Sheep to Shawl. Patti announced that Bethlehem will be December 12-16 this year and is looking for volunteers to help teach spinning on a spindle. Nancy shared some gorgeous glass work she made while on a trip to Seattle. Cookie shared the yarn she has been working on a while on her spindle. Kelly shared several of her crocheted fish hats for Courageous Kids/American Cancer Society.

We had sunny yet breezy weather at the park for this month’s meeting. The wind made it difficult to work with our fiber! Some switched to knitting instead of spinning.

Our meeting began with the Treasurer’s report. Aviva spoke about the upcoming wool show and auction at the Monterey County Fair 8/29 – 9/2. The auction is on Labor Day. We also talked about spinning at the Scottish Games at the Alameda County Fairgrounds in Pleasanton also on Labor Day weekend. It’s known to be a hot venue but a lot of fun if you’d like to go and spin! Ginger and Aviva discussed the fleece they are working with for the Sheep-To-Shawl at Lambtown in October. Also upcoming is Antique Autos in History Park in San Jose on 9/22. At least 2 of us will be spinning there this year. On 9/28 the Sunnyvale Heritage Museum will be having a celebration and they have invited us to spin from 11am – 4pm. Kelly shared that from 9/6 – 9/8 Meridian Jacobs Farm in Vacaville will be having an “estate sale” featuring fiber, yarns, books, and some equipment.

Aviva was spinning silk on her pocket wheel while Laura was spinning cotton rolags on her newly made spindle. Cookie was weaving on her pin loom and Nancy started spinning but then switched to knitting due to the wind. Ginger spun lovely purple wool while Kelly spun merino/rambioulet. Meagan showed us the components she purchased to make her own blending board. Laura carded some of Meagan’s cat’s fur and spun up a small bit on her spindle. 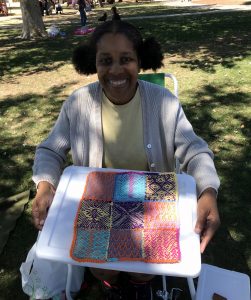 Cookie showing off her brightly colored weaving squares that will become a bag. 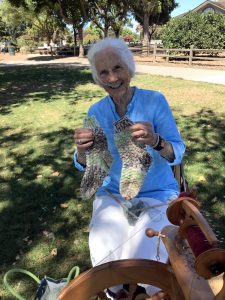 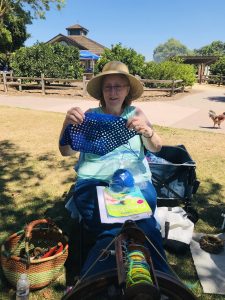 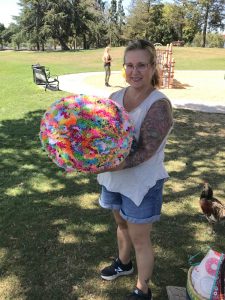 We had lovely weather for our gathering this month at Emma Prusch Park. The park was quite busy and thus we had many interested children come over and Patti and Carol showed them how to spin with spindles.

The Treasurer gave her report to start the meeting. Sheep To Shawl for Lambtown was discussed. Carol talked about the Central Coast Weavers Retreat near Cambria in November 2019. Kelly mentioned that she visited Green Planet Yarn in San Jose which is now Fillory yarn. They will eventually be starting weaving and spinning classes! Kelly also inquired with the group about starting a Serendipity Spinners Facebook group. Most felt it would be a good idea. Laura also suggested making our Ravelry group more active.

For sharing Laura brought some woven samples she made for a jacket she’s making for her husband. And Joan showed off lovely textured shawls. 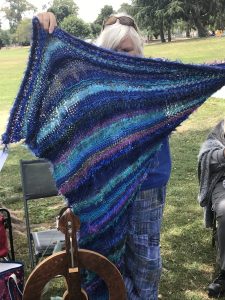 This month’s large group was greeted with superb weather and sunshine! We welcomed 3 new members!

The Treasurer gave her report and newly created name tags were also handed out. Upcoming fiber events were discussed: Martial Cottle Park Spring Festival, Hidden Villa, Spinning at the Winery, and Barn to Yarn in Hopland. These have been added into the calendar for more info. It was decided that we’ll all bring our own projects to work on at Hidden Villa on April 27. Carol may also bring a completed shawl or some hand cards.

Show and Tell began with some sharing from items purchased at last month’s Stitches West. 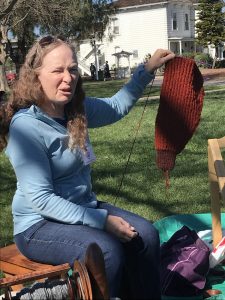 Aviva shared her in-process sweater for her husband made from hand spun. 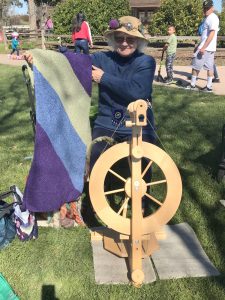 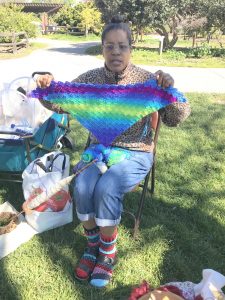 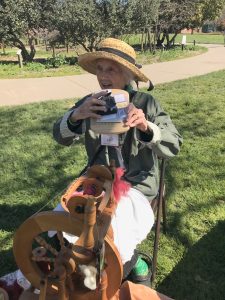 Nancy brought along some needle felting and cookie cutters 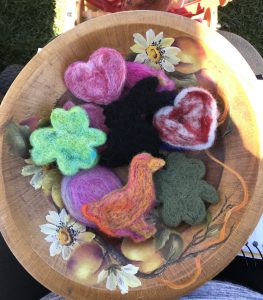 Here are some of Nancy’s needle felted goodies 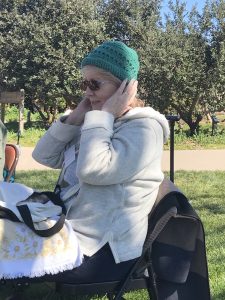 Patti was proud to share her first ever crochet hat! 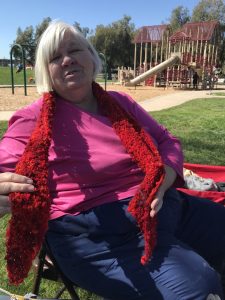